EMERGENCY ALERT For information on Coronavirus... Read On...


Prior to Windsor's earliest settlers arriving, the area that is now Windsor was known only as a "beautiful green valley with sturdy oak trees," with grass that grew as high as the girth on a horse's saddle.

In the early days, all land in the area was purchased through the land office in San Francisco - all maps were coded with degree coordinates and section numbers. Many times, all that buyers knew about their land (selling for $1.25 an acre in 1853), was whether it was on the river bottom or in the hills.

One early settler insisted on high land, having spent the better part of his life living and working swampy land. He couldn't have known, much to his descendants' dismay, that in Windsor, river bottom land was the best farmland in the county!

Henry Bell established the first mercantile store on a part of the 160 acres he purchased. He was typical of the sort of man who came to the area, in that he did lots of things well. It turns out that his 160 acres encompassed the land where Windsor now stands.

Settlers came from all over the United States, as well as Scotland, Ireland, England, Germany and France. Most lived for a time in the Eastern states before moving on to California; but they retained enough of their ethnic heritage to make early Windsor a fascinating blend of peoples and cultures. 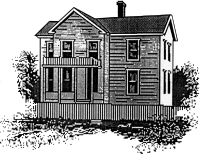 The Town of Windsor

Bell House
It was early in 1855 that Windsor got its name. Hiram Lewis, a pony express rider for the county, named the community "Windsor," presumably because the area's pastoral beauty reminded him of the grounds surrounding Windsor Castle in his native England. So pleased with the beautiful oak trees and the area's park-like appearance, he stayed on to become its first acting postmaster. On August 31, 1855, a Windsor Post Office was established.

In 1872, the railroad came to Windsor. With the railroad, the town moved from East to West, close to the rail line. The advent of the railroad enabled farmers to begin extensive fruit production because of the ready market on the other end of the line.

Masonic Hall
On Sunday, May 21, 1905, Windsor's worst recorded fire hit the center of town. Fanned by north winds, it destroyed the hotel, F.J. Pool's general store, the barber shop, and harness shop. The total estimated damage was about $30,000.

A year later, on April 18, 1906, The Masonic and Odd Fellows Halls were damaged in the earthquake. The second story on the Lindsay Building collapsed, (it was to remain a one-story building thereafter).


It was in that first decade of the century that Windsor got its first telephone system, franchised by W.C. Chisholm. Residents could buy into a line, but they had to hook up the equipment (including the poles) themselves, and pay a certain amount for each call. The first "farmer's line" went down Pleasant Avenue, and soon Louie Lehn installed another rural line along Arata Lane and extending Northwest to East Side Road.

Electricity came in late 1911 when the Cloverdale Electric Light and Power Company provided businesses and residences with their first electric power. Johnny Walker, the only man in town who knew anything at all about electricity, wired houses as the power lines were extended. That meant one drop cord in the center of each room, with a single bulb dangling from the cord. Then, along came electrical appliances; and people added more and more plugs. The added burden caused many systems to catch fire, and some old houses were lost in this fashion.

In 1915, Old Redwood Highway was paved for the very first time. Previously, all roads were dirt. All work was done with horse teams, and the workers would camp in Windsor. The Highway's first casualty was run over, not by a car but by a piece of horse-drawn equipment. It was called only "The Highway," since, at that time, none of the roads had any names. If you were giving someone directions, you used the names of ranches, or people who lived along the road.

During World War II, a U.S. Army air base (now the Sonoma County Airport) was built in Windsor, and fighter planes were a familiar sight and sound day and night. In 1943, a German prisoner-of-war camp was established west of downtown Windsor. Captured German submarine crews and members of the Africa Corp were brought to the camp, where they worked on farms in the area. Old timers remember that surveillance was pretty lax, and prisoners had been known, during a friendly game of soccer, to go after the ball over a fence, and come back that night after a day in town. They never went far, because they didn't have much money, but there was enough for a beer in a friendly tavern. There were some stories of prisoners going all the way to San Francisco for the day; but most just went as far as Santa Rosa or Healdsburg. The camp closed shortly after the war ended and now all that remains are the foundations.

Windsor was primarily agricultural throughout most of the 1900s, with wine grapes, hops, and prunes as the primary crops. The Town's population and economic growth grew rapidly from the early 1980s, when housing development blossomed, bringing new families and businesses into this area, with incorporation occurring on July 1, 1992.

Excerpted from The Project Windsor Report by Jane M. Engdahl , with permission from the Windsor Historical Society.


For further information on the history of Windsor, the following publications are available:
Windsor Historical Society
Online Payments
Easily pay your bills online
Ask A Question
Do you have a request or concern? Let us know about it.
Notify Me®
Sign up to receive email or text notifications
Town Maps
Find GIS special maps here
Jobs
Search job openings in the Town of Windsor